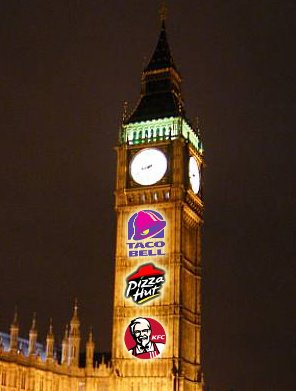 London, England – Yum Brands has just announced that additional branding will be added to the clock tower in London formerly known as the “Taco Bell Clock Tower”, formerly known as “Big Ben”. It will now be called “The Taco Bell Pizza Hut KFC Clock Tower”. Additionally, the former clock bell has been replaced with a digital recording of the bell which has been mixed with the “Combination Pizza Hut and Taco Bell” song.