Pizza De Mayo 2011 is over, and the photos need to be sorted, cropped, and awesome-tastic-o-fied, so until I complete this post, please enjoy this  teaser photo of ‘Deep Dish MEATZA 2 (Electric Meataloo)’. 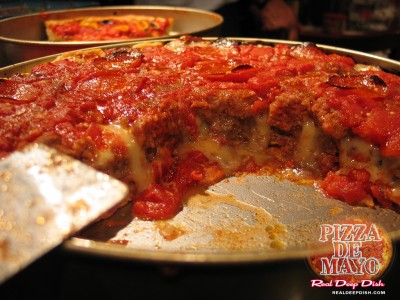 A photo of a partially devoured Deep Dish 'Meatza' from PIZZA de MAYO 2011. Also pictured in the back, a sausage, pepperoni, mushroom and sweet pepper combo. Not pictured: a 14" Italian sausage patty / pepperoni combo, and the best 12" spinach /garlic with provolone and mozzarella. We were too busy eating them to take their picture.

I’d like to thank everyone who attended 2011 PIZZA de MAYO, and would like to especially thank Dov and Ann and anyone else who figured out how to use my camera to help take some of the photos that you will see below. So without further ado, I bring you:

If you’ve read about last year’s Pizza de Mayo , you may know that I’ve already made a deep dish ‘meatza’. The original intent was to see if I could make a deep dish pizza with a meat crust instead of the traditional dough crust. I had always intended to try making it more than once, so the first attempt was always considered a learning experience. I did learn valuable things from the first attempt and was ready to try again.

This year, the plan was very much about grease control and stability. Last year when I built the Meatza, I used raw bacon for the bottom and filled in the gaps with ground beef, as well as using ground beef for the entire outer lip. This year, I eliminated the major contributor to last year’s grease-overload by pre-cooking the bacon (2 lbs of it). I cooked the strips until they were almost crispy, but still soft enough to bend, draining them on layers of paper towels. Last year, I didn’t have enough ground beef to cover the whole bottom. This year I made sure we had plenty of ground sirloin to cover the bacon. (I will probably be making a batch of chili later in the week; I bought too much beef this time). Instead of an entire patty of Italian sausage, I put a criss-cross lattice of sausage, and then placed pepperoni sparingly on the top in the spaces between.

In a slight variation from the theme, I took out extra insurance on the grease-factor this year by surrounding the bacon/beef crust with a traditional deep dish pizza dough crust. Why put all that amazing flavor to waste as drippings in the pan when you can soak it up in the crust ? This turned out to be the best thing because it tasted incredible, but also increased stability of the entire Meatza and made serving easier.

I hope some of you are able to make it out next year for Pizza de Mayo 2012, which will feature  a variety of deep dish pizzas, where you will very likely encounter DEEP DISH MEATZA 3 : Subtitle TBD. 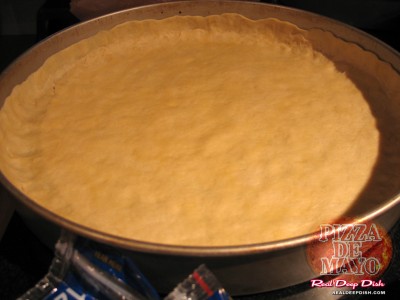 Different from the previous attempt, I opt to use a standard deep dish crust for the base. This turns out to be a great move.

This is a 12″ round aluminized steel cake pan. I call this a medium deep dish pan. 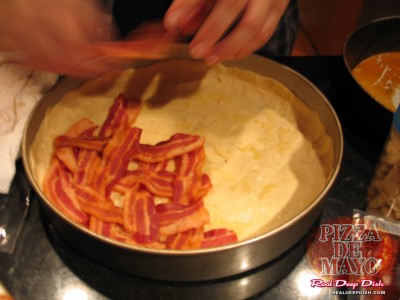 After a liberal sprinkling of crushed garlic, the bacon lattice is applied. 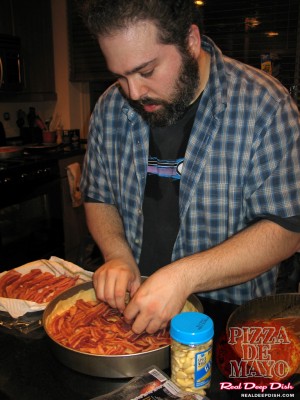 Some of my guests had commented that they'd never seen anyone weave bacon before.

See the bacon on the left? That’s TWO POUNDS (pre-cooked weight).
I cooked them all the night before and didn’t eat one slice! How’s that for discipline?
Yes, we used ALL OF IT in the Meatza! 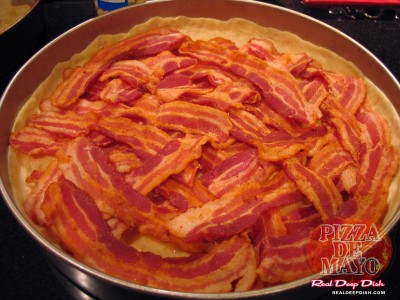 A fully-baconed meatza, only PARTIALLY completed

The original reason to weave the bacon into a lattice was that it WAS the bottom of the Meatza.
(Also, it looked freakin’ cool!)
Only AFTER weaving this over a pizza dough crust did I realize I probably didn’t need to be so precise.
(Still looked cool, right?) 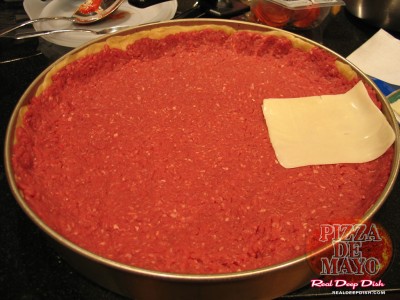 2 lbs of lean ground sirloin are pressed into a solid patty and worked up the sides. Then comes the cheese.

A full layer of ground beef would add to the stability of the Meatza. 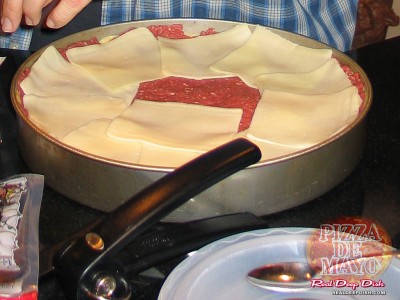 A layer of sliced mozzarella going on top of the ground beef. 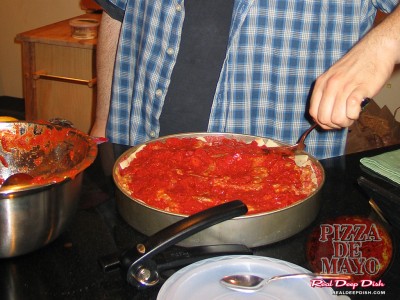 A criss-cross of italian sausage was added, but the photographers took a break to eat pizza. Crushed tomatoes are added to cover the pie. Then, a sprinkling of parmesan/romano and IN TO THE OVEN!

No, I don’t know why we didn’t move the can-opener before taking the the last 2 shots either. 🙂 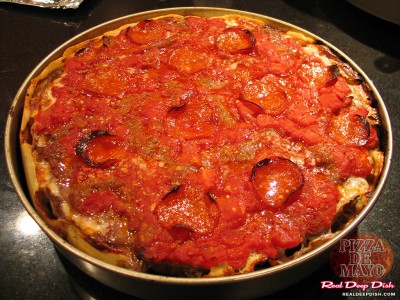 Wow! Look at how there’s a bit of caramelized cheese on the outer crust, and that bit of char on the pepperoni!
If you look close enough, you can see the criss-crossed italian sausage. 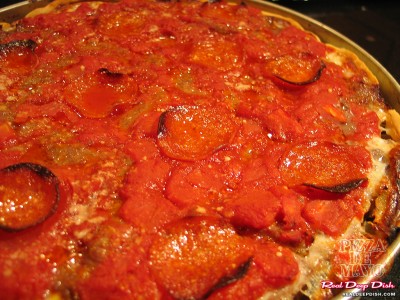 At this moment, I am so happy I pre-cooked the bacon. It came out perfect! 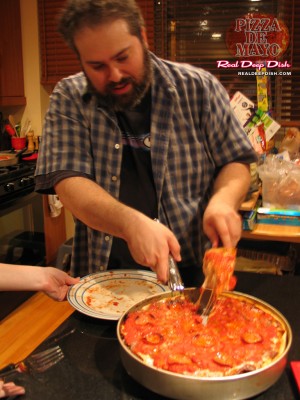 Look at the strings of cheese hanging from that first slice!
Dang! Blogging is sure making me hungry! BRB. Gonna nuke a slice! 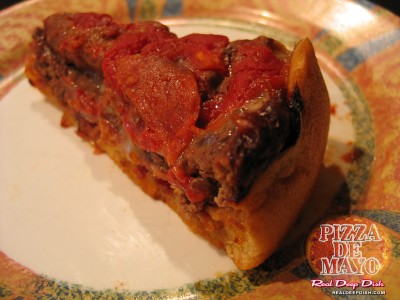 Meatza - closeup (reheated). This slice was eaten minutes after shooting and uploading this photo.

So, how should we configure Meatza 3?
Bacon on top? Bacon below the dough? Beef on the outside? Additional tasty (possibly endangered) animals? Some other artistically formed meat pattern?
Tune in next year for PIZZZZZZZZAAAAAA De MAAAAAAAAAAYOOOOOOOOOOOOOO!!!!
(insert superhero tv show music & roll credits).