The Holy Book of the Internet (aka Wikipedia) tells us that the precursor of modern pizza originated in Naples, Italy in the late 18th century.
One popular story in books, TV shows, and the Internet tells of King Ferdinand of Naples (1751-1825), who would sneak out in disguise to go get his pizza fix, on account of pizza having been banned from the royal court by Queen Maria Carolina. Another story says the Queen may have been the actual pizza enthusiast. Perhaps she rescinded the ban after being served a slice, or maybe the “official story” was changed by whomever survived the other. We may never know the true story. We do know for sure, however, that at some point, an outdoor pizza oven was built on the grounds of Capodimonte, commissioned by either the King, the Queen or their grandson, also named Ferdinand.

Pizza purists in Naples consider two varieties of pizza to be the authentic variety:
The Marinara, named after sailors’ wives,
and The Margherita, named after the Queen of Savoy.

This is a Marinara pizza: 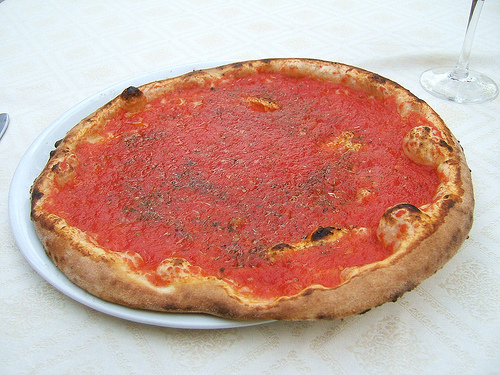 Read this: “The Marinara is the older of the two and has a topping of tomato, oregano, garlic and extra virgin olive oil. It is named “Marinara” not because it has seafood on it (it doesn’t) but because it was the food prepared by “la marinara”, the seaman’s wife, for her seafaring husband when he returned from fishing trips in the Bay of Naples.” – Wikipedia;

Well, now it makes sense why many pizza and pasta sauces are called Marinara. With the exception of anchovies (shudder), you really don’t see seafood ending up on a pizza until places like California and New Haven, CT (Frank Pepe’s) get in on the act in modern times. In parts of Italy outside of Naples, (depending on the city) you can also find anchovies on a “Marinara” pizza. For what it’s worth, I’ve learned recently from an episode of Anthony Bourdain’s “No Reservations” that fresh local anchovies are a bazillion times better and totally different from the canned variety most Americans are familiar with. I’m still not putting them on my pizza.

Why is it called Margarita? Well, we sorta told you in the previous section (the Queen, remember?), but let’s let “The Holy Book” expand a bit on the subject: 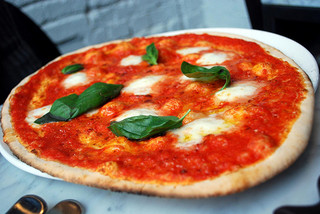 Now, read THIS: “The Margherita, topped with modest amounts of tomato sauce, mozzarella cheese and fresh basil is widely attributed to baker Raffaele Esposito. In 1889, he baked three different pizzas for the visit of King Umberto I and Queen Margherita of Savoy. The Queen’s favorite was a pizza evoking the colors of the Italian flag – green (basil leaves), white (mozzarella), and red (tomatoes). This combination was named Pizza Margherita in her honor.” – Wikipedia;

Basil, Oregano, Garlic, Mozzarella, and Tomatoes are still very much a part of modern pizzas today.

Incidentally, we believe this was also the very first pizza delivery on record, beating Domino’s by about eighty years. (No information is available on whether it took thirty minutes or less, or whether the pizzas were free.)

Now we get to America: 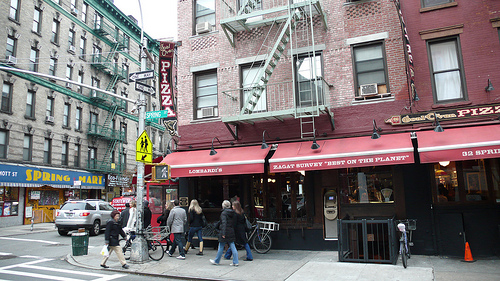 “The first “official” pizzeria in America is generally believed to have been founded by Gennaro Lombardi in Little Italy, Manhattan. Gennaro Lombardi opened a grocery store in 1897 which was later established as the first pizzeria in America in 1905 with New York’s issuance of the mercantile license. An employee of his, Antonio Totonno Pero, began making pizza for the store to sell that same year.”– Wikipedia

After Lombardi’s and other Italian neighborhoods launched pizza in the United States, a number of other cities began to reproduce or put their own take on pizza in the U.S., and New Yorkers everywhere have been ridiculing our variations ever since, although only St. Louis really deserves the ridicule. Pizza didn’t really get popular until the end of World War 2 in the early 1940’s, when GIs would come home looking for the tomato pies like the ones they encountered in Italy while looking for alternatives to their Army rations.

All of the information I’ve just given you (with the exception of my snarky comments and strong opinions) is widely agreed to be accurate information about the origins of pizza. Wikipedia’s articles on the subject seem to be a culmination of years of independent research, much of which you can easily look up yourself. The information from Wikipedia about variations of pizza in America, however, may not all be entirely complete or accurate. Throughout Deep Dish 101, I will try to include the most accurate info possible about Chicago Deep Dish pizza and other styles of Chicago pizza. A number of television programs have also done some of this work for us. I highly recommend watching “Pizza Paradise”, although they get one thing wrong when they talk about Chicago: It is called the Second City because the first one burned down. Don’t believe the East Coast bias – Chicago is second to NONE!

The arguments over the ‘authenticity’ of pizza will never end as long as humans exist on this planet, and will quite possibly last longer than that. I may even delve into the fray when talking about “Authentic” Chicago pizza in the next lesson, but it is mainly to show distinctions between variations, and to correct false information. I assure you, they are all still pizzas.

Here’s a link to Tony Bourdain comparing New York pizza to the Naples original.
http://www.travelchannel.com/shows/anthony-bourdain/video/perfect-neapolitan-pizza
SPOILER ALERT!!! – THERE ARE DIFFERENCES!
Now you New Yorkers can get off your high horses and maybe not be so afraid to try new things.

ATTENTION ‘PIZZA-TRUTHERS’: If you cannot wrap your head around the fact that Chicago Style Deep Dish Pizza is actually pizza, you are welcome to continue to bury your head in the sand; then kindly escort yourself out of my virtual classroom. (Don’t let the door hit you in the …) 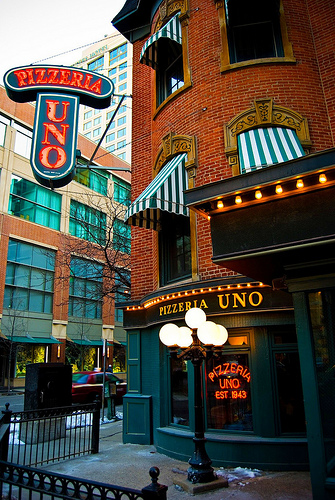 Photo by multisanti via Flickr (send this person $$$, yadda yadda…)

Chicago Style Deep Dish Pizza was invented in 1943
at PIZZERIA UNO, 29 E. Ohio St in Chicago.
This much we know for certain.

The popular version of how Deep Dish was invented goes something like this:
Texan Ike Sewell , a Chicago liquor distributor, and his partner Richard Novaretti, aka Ric Riccardo of Riccardo’s Restaurant, after a failed attempt at preparing Mexican food (Ric got violently ill), decided to ditch their plan to open a Mexican Restaurant in Chicago and try their luck at pizza.

“Riccardo suggested pizza, which he had encountered in Italy–as indeed many American servicemen were doing during World War II. Sewell’s complaint with pizza was that it was insubstantial, little more than an appetizer–and readily available in Chicago’s Little Italy neighborhood besides. Sewell wanted a substantial, meal-size pizza. After some experimenting, the partners devised something with a thick crust and plenty of cheese.” – Pizzeria Uno Opens by Phil Vettel

Phil may be off a bit on the “thick crust” comment (it’s more of a sturdy, thin-to-medium crust with a high wall), but we’ll get to that in the next few lessons.

Sewell and Riccardo purchased the mansion of lumber baron Nathan Mears at the corner of East Ohio and Wabash streets in Chicago. In the beginning, it was not always called Pizzeria Uno. The Chicago Tribune reports the efforts of historian Tim Samuelson, who delved “deep” into Chicago Deep Dish’s origins, trying to build a case for landmark status:

“Their restaurant opened in 1943 as The Pizzeria, became Pizzeria Riccardo soon afterward…”

As Riccardo’s own restaurant was pretty well known at the time, they probably renamed the pizzeria to help give it more recognition. Riccardo died years later in 1954, then the following year, the restaurant was renamed again.

“… settled in as Pizzeria Uno in 1955, when the partners opened Pizzeria Due in another Mears mansion at Wabash and Ontario.”

“…news clippings of the time say he became manager of Pizzeria Riccardo in 1951, but clips also variously call him the restaurant’s co-owner and main operator ” – Historian cuts into history of Chicago deep-dish pizza by James Janega

We may never know for certain.
Some have suggested that neither Ike Sewell nor Ric Riccardo had much experience in the kitchen, although one source claims deep dish was based on one of Riccardo’s family recipes. Some believe that it’s very likely that Rudy Malnati had a lot to do with it. Others have made the claim that long time Pizzeria Uno Chef Alice May Redmond had something to do with it, but as many articles state that she had left for Gino’s East after 17 years at Pizzeria Uno (1966) – the math doesn’t quite add up, though it’s entirely possible that some or all of the people I’ve just mentioned had some part in adjusting the recipe.

Rudy’s relatives maintain that Malnati was instrumental in the development of the very first deep dish pizza. Lou Malnati may be the best evidence for that, having worked at Pizzeria Uno for years with his father, later managing Pizzeria Due in 1955, and then in 1971, opening his own pizzeria in Lincolnwood.

Piece of the Pie Part 1 of 4: The Origins of Deep Dish Pizza – via Chicago’s Best

The Malnati family, especially Marc Malnati, has been very visible on modern day food television shows, extolling the virtues of their “buttery”, “flaky”, pizza dough, yet protecting the secret recipe with diversion and deception (and sometimes flat-out lies), as demonstrated in the first five minutes of this show from America’s Test Kitchen. The staff of ATK ends up going down the wrong road trying to duplicate the crust. Trust me when I tell you not to follow their recipe. It might make a decent pizza, but it is way too much work for something you will discover is actually quite less complex. I will explain where they went wrong in an upcoming lesson.

Is your head spinning? Don’t worry, the next lesson will be less intense, or at least a little more focused.

Much of the information in this course is sourced from, inspired by, revised and/or expanded from The Pizza Rants, with a generous amount of “borrowing” from Wikipedia and other sources, which will gladly be credited when source information is available. If you are one of the sources referenced in this article and would like to correct, amend, or receive appropriate credit, please let me know. Information compiled on this blog is used in the spirit of fair-use law. Thanks for reading.