This One Goes Out To Jon Stewart 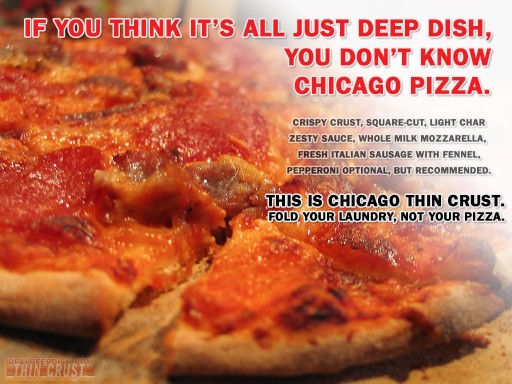 It’s easy to compare apples to oranges, but let’s not talk about fruit.
Let’s talk PIZZA.

Chicago Deep Dish may be strange and unfamiliar to a New Jersey native, but it is PIZZA, regardless of what Jon Stewart and his East Coast “Pizza Truther” writing staff think.
But as my earlier fruit comparison suggests, let’s try comparing things that are a little closer to themselves.

I mentioned in an earlier post that Chicago has THREE distinct styles of pizza:
Deep Dish, Stuffed (blonde double-crusted step-child of Deep Dish), and Thin Crust.

If you’re going to keep dragging out this tired pizza war, let’s have the
New York slice go up against the mini-titan, CHICAGO THIN CRUST.

While Deep Dish is clearly superior to a New York slice,
Chicago THIN CRUST quite simply OBLITERATES it.

You wanna go, Stewart?!
Take on our Chicago Thin Crust!
IT WILL KICK YOUR FLOPPY FOLDY NEW YORK PIZZA’S KEESTER!