(I was going to call this rant ‘Rant Hard With A Vengeance’, but then I remembered – that was the 3rd movie) 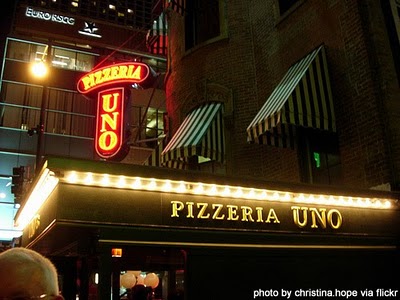 In one of my earlier rants about Pizzeria Uno, I briefly mentioned a difference between the original location and the ‘Uno Chicago Grill’ chain of restaurants all over the USA.
Hearing continually about people’s negative reviews of deep dish pizza after having visited a chain version of the restaurant in cities outside of Chicago, I feel I must make some things clear to the uneducated:

Though all the Uno’s restaurants are owned by the same corporation (now headquartered in Boston, MA),
only the original locations of Pizzeria Uno and Due in Chicago serve the authentic Chicago Deep Dish pizza that originated here back in 1943 as a collaboration by Ike Sewell, Ric Riccardo, and Rudi Malnati.
The jury is still out as to how involved each individual was with the actual idea, but all 3 men were pivotal to it’s success.

Now, when I talk about authenticity, I’m not just making a claim like when people say their pizza is only great in New York because of the water that they strained from the Hudson. There’s a real visible and substantial difference between the pizzas you get from the downtown Chicago pizzerias (Uno and Due) and the chain of restaurants owned by the same company.  I was unfortunate to encounter a few of the latter – one out east in New Jersey and the other out in the Chicago suburb of Schaumburg, IL that I mainly visited for confirmation. Confirmation of what? – of the company’s selling of their namesake’s deep dish heritage and reputation to make a temporary, though likely very lucrative profit. 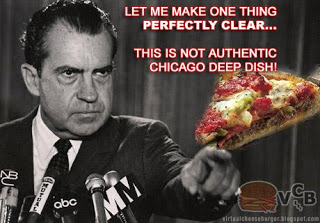 THE PIZZA YOU GET FROM THE CHAINS IS NOT AUTHENTIC CHICAGO DEEP DISH.
Authentic Chicago Deep dish has cheese on the bottom, sauce on the top.

The kind of pizza served at “Uno Chicago Grill” more resembles something served up by Pizza Hut.
The chain restaurant is so many kinds of wrong – They make a giant moat of outer crust instead of a thin outer lip. They use shredded cheese instead of sliced and for some insane reason, they put the cheese on top with a scant amount of sauce scattered around. You’re reminded of several scenes from the movie ‘My Blue Heaven

‘, where the Italian mobster played by Steve Martin and some of his former ‘business partners’ are placed in witness protection in the WASPiest city in the US and forced to eat what the locals call ‘food’. The worst part is Uno’s also sells this abomination in grocery store freezer aisles, further damaging the reputation of Deep Dish. It’s not bad pizza, but it’s just a very bad example of Chicago style deep dish. If you’re going to expand a successful deep dish pizza business to other cities, stick to the original formula and let people develop a taste for deep dish pizza instead of intentionally ‘dumbing it down’ and giving people a false impression of what Chicago deep dish is. By going into other cities and representing this shady knockoff as real deep dish, you distort people’s perception of Chicago pizza and not only do a disservice to your own company, but to the City of Chicago and Americans everywhere.

I hope that if you are reading this and have eaten at one of the Uno’s chain restaurants in another city and have yet to visit Chicago, please do yourself a favor and when you do visit, plan to stop by Pizzeria Uno (at 29 East Ohio) or Pizzeria Due (a block away at 619 North Wabash Avenue) and get the REAL thing before you pass judgement on Chicago Deep Dish Pizza. It’s the least you can do.