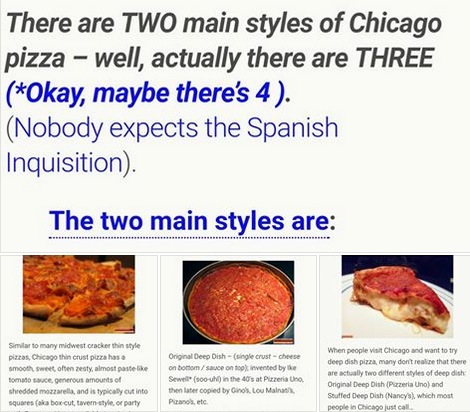 Lesson 3 – Styles of Chicago Pizza and Maybe a Dough Recipe

But before I get to that, I should get to this:
I had mentioned in an earlier lesson that I would tell you the deal about Chicago styles of pizza.

There are TWO main styles of Chicago pizza – well, actually there are THREE
(*Okay, maybe there’s 4 ).
(Nobody expects the Spanish Inquisition).

The two main styles are: 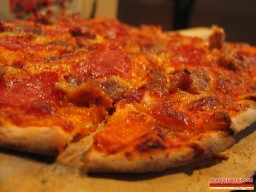 Pizza had been in Chicago since at least 1909, but the origin of the Chicago thin crust that we know today is a little fuzzy – we think the style was invented between 1946 and 1949. Similar to many midwest cracker thin style pizzas, Chicago thin crust pizza has a smooth, sweet, often zesty, almost paste-like tomato sauce, generous amounts of shredded mozzarella, and is typically cut into squares (aka box-cut, tavern-style, cracker thin, or party cut). Pepperoni is an available topping in Chicago, but often comes second to Italian Sausage, which is added to the pizza raw before baking.
Contrary to what many people on TV tell you, when Chicago locals order pizza, this is the style we usually order. Some people in Chicago consider Deep Dish to be a tourist or “special occasion” thing. (They clearly haven’t eaten mine!) Popular thin crust shops include Vito & Nick’s, Rosati’s, Barnaby’s, D’Agostino’s, Pat’s, Aurelio’s, Home Run Inn, and hundreds of other great spots all over the city and suburbs. 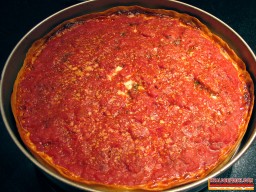 I consider this style to be ‘true’ authentic deep dish.
Pizza dough for original deep dish is different from other pizza doughs, in that it typically does not require the long kneading times and high springy gluten that other pizza doughs try to achieve. I say “typically” because I sometimes see variations throughout the city.
First, dough is pressed out into the pan, then a layer of SLICED (not shredded) mozzarella goes down, then meat or other toppings (optional), then the whole thing is covered with a healthy layer of chunky crushed tomatoes. The only cheese that goes on top would be a sprinkling of dry grated romano and/or parmesan, before baking. 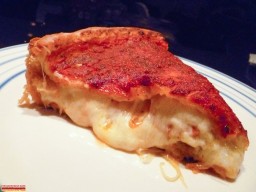 Stuffed Pizza – (two crusts with a “ton” of cheese, sausage, etc. between the crusts, and tomato sauce on top); invented in 1971 at Nancy’s Pizza. A variant of deep dish pizza, based on Rocco Palese’s Italian family recipe for “scarciedda“, Stuffed pizza is clearly different from Original Deep Dish. This style of pizza has a top and bottom crust with a substantial amount of cheese and other ingredients in-between, and the sauce going not inside, but on top of the top crust. From my experience with Stuffed pizza, the dough used for this style of pizza is closer to a regular pizza dough than that of Original Deep Dish. Connie’s, Edwardo’s & Giordano’s are also famous for this style of pizza.

So now that you know the basic difference between the styles of Chicago Pizza, I can continue with the thing I was talking about up there…

Anyway… so back in August, the food channels were showing a lot of pizza related shows and I was doing a bit of R&D and watching what others were saying on TV about Chicago pizza and other styles of pizza, so I could dispel any bad information or questionable techniques. Goodness knows there’s a lot of bad info floating around (friggin’ corn meal!). Don’t get me started on the “Uno’s Chicago Grill” dough tutorial you might find on YouTube. I’ve eaten Chicago style pizzas since I was a kid. I know what I’m trying to achieve & I’ve been researching this stuff for a while, so when I see someone who is not from Chicago telling us something is Chicago style, I give them the benefit of the doubt… until I see something wrong. It’s been a little while since I saw the episode, but from my recollection (pardon my memory if I don’t have all the details right – I don’t have the show on my DVR any more), a few things stood out to me that bugged me a little bit:

1) They chose to NOT go to Chicago for their Chicago Style pizza segment. (WTF?!?!)
2) Tony G. was clearly NOT using deep dish dough (yes, there’s a difference) as I recall seeing a sheeted pizza dough being dropped into the pan. This is OK if he’s making STUFFED pizza, which I wasn’t sure if he was, because I don’t recall him putting a second sheet of dough on before he sauced it.

2) He doubled up on the sausage and cheese, and used shredded and not sliced mozzarella.
Again, this is probably normal for a STUFFED pizza like Nancy’s, Giordano’s or Connie’s, but not for a single-crust original deep dish. So at this point, I’m pretty sure he’s making a stuffed pizza, but then… maybe I missed it… no top crust! So I did a mini-rant about it at the front-end of a food-porn blog post.

I’m not sure how he (or you) found this site (were you “googling” yourself, Tony?), and I couldn’t be more excited that he did, because Tony replied to my mini-rant :

Hey buddy unfortunately you don’t know the reason why we made the double sausage and cheese Chicago Pie.
This was a special surprise from the producers for the host because that is the pizza he ordered growing up. He was totally excited and when he ate it, it brought him back from when he was a kid..Most of our conversations were taken out during editing along with the Spinach pie, and the Mushroom and Pepperoni. The cracker thin was taken out as well in edits.. we used Ceresota and KYROL in that part.. We shot for 5 hrs that day and they used about 2 1/2 minutes…Considering that I have worked with Connie’s, & Giordano’s, and my book research with Edwardo’s and Lou Malnati’s I have some hands on knowledge in Chicago Pizza.

You should know I like and admire Tony G.
I’m sure he did plenty of research to get where he is, he’s paid his dues, and I have no doubt that the man has amazing pizza making skills. Tony is “the goods”!

OK, so Tony was trying to reproduce something for “United Tastes of America” host Jeffrey Saad. I think it’s pretty cool that Tony tried to reproduce a pizza from his past, and cooler that he tells us what kind of flour he uses for his pizzas.

I replied that I thought it was a shame that they edited him down.

In fact, I’m pretty sure that it was the video editing that hosed us all on this situation of a misunderstanding of a situation (of a misunderstanding).
Maybe there’s some lost video that might fill in the gaps of that pizza construction to let us know if a top crust ever made it onto that pizza (or Tony, could you please tell us?).
It would have been nice if they’d put the Chicago box-cut thin crust into the show, and maybe explained to people what I just explained to you all up there about the two…err… three styles of Chicago pizza.
That would have been a nice bit of info for the rest of the pizza eating world to see.

I didn’t mean to aim that mini-rant at Tony; he just happened to be making the pizza at the time.
My real target was TV producers’ continual disrespect for Chicago pizza, whether it was intentional or not.
I think I’m just getting tired of seeing Chicago pizza being represented in one of three general ways on TV:

1) Some guy from a now Boston-owned Pizzeria Uno (or a narrator) gives you the Pizzeria Uno origin story, and then they follow up with one of the Malnati brothers giving you a different version of those events, or they send a guy from the east coast over to the cab-driver-founded Gino’s East pizzeria because of the yellow crust, (do NOT get me started on a cornmeal rant!), and they always find some jerk from New York to disown deep-dish’s pizza-origins and call it a casserole.

2) They send the fish-out-of-water host to Chicago to find out how to make Chicago pizza, get bad or deceptive information about the “buttery, flaky” dough or the mythical “corn meal”, completely ignore the purpose of putting cheese on the bottom when they try to make it back at the test kitchen, and then end up with a perversion of Chicago deep dish that resembles a cross between a croissant and a lasagna.

3) They have a NY vs Chicago pizza contest (and completely leave out Chicago thin crust) or put two almost identical deep dish pizzas up against each other (Uno vs Malnati’s) instead of what should have been the real matchup (Uno/Malnati’s vs GINO’S), and inevitably use rigged judging to pick a winner. Well, this IS Chicago. That last part probably couldn’t be helped.

I like to remind New Yorkers that Deep dish is just another variation of pizza, just like NY style pizza is a variation of the Neapolitan pie, so I don’t have a huge problem if you like to make your pizza differently (unless you use provel or anchovies). If you put it together and bake it and it tastes like pizza, it’s all good to me,
but don’t call it Chicago Deep Dish if it’s a Stuffed Pizza, or at least make the distinction.
There’s a THIRTY YEAR GAP between the invention of Deep Dish and the invention of Stuffed pizza.
It’s not really fair to lump stuffed pizza in with original deep dish and you’re doing people a disservice by not differentiating between the styles.

So to all the pizza food show producers out there: Let’s set the record straight on Chicago pizza,
and from now on, let’s all agree: There are THREE styles of Chicago pizza – not two.

I end this lesson with these last words of wisdom:
“It’s very hard to screw up pizza, but very easy to make it wrong.” – Me

You’ve read this far and now you’re probably waiting for a dough recipe.

OK, no more teasing: Here it is – Click Here to Download the RECIPE.
The last deep dish dough recipe you will ever need for a single-crust Original Authentic Chicago Style Deep Dish pizza.
100% cornmeal-free! Trust me, you won’t need any.

UPDATE: 1-7-2012:
Apparently the web-link was broken for the recipe. It’s fixed now. Sorry; that probably seemed to be a cruel practical joke to some of you who tried to download the recipe. I assure you, it was not intentional (though it seems hilarious in hindsight). 🙂

UPDATE:2-1-2012: HIGH ALTITUDE BAKING –
A friend in Colorado mentioned she wanted to try making deep dish dough, and then it occurred to me that there may be a need for adjustment when baking in high-altitudes. If you’re one of those people breathing thinner air, try cutting the yeast by one-third and then check the dough halfway thru the normal rising time. You may be able to use the dough in half the time, or punch it down and let it get a second rise in before using the dough. Also, you may need to put a loose sheet of aluminum foil over the pizza pan after the first 10-15 minutes to keep it from burning. If you’re one of those lucky people living high up in the stratosphere, please let me know how the recipe worked out for you, and what kind of adjustments you made to compensate for high-altitude baking.

Come back soon for:

Deep Dish 101 – Lesson 4: The Yet To Be Determined Fourth Lesson about Deep Dish.***

Like the title? Yeah, I thought you would. I’ll likely expand a bit on the methods of making the dough and building your deep dish pizza, which may help you out if you’re trying out the recipe at home.

*** OK, the next lesson is actually called: Lesson 4 – Nuts and Bolts, but we’ll get to the rest of that stuff soon.